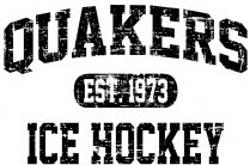 The Quakers mission is to foster a fun and affordable family environment for any player who wants to learn to skate/play the great sport of ice hockey. In addition to developing fine young hockey players, our goal is to also provide life lessons that promote team comradery, respect & good sportsmanship.

The Westtown Rink was our home for the next 11 years.  Unfortunately, the Westtown Community Center, which included our rink, was sold in 1985.  The Quakers Mites, Squirts and Pee Wee teams moved to the Springfield Rink, while the Bantams and Midgets went to Valley Forge Colonials, the Little Flyers and Radnor.  Shortly after the Quakers left, the rink was turned into the Kirkwood Fitness Center and the current business park was built.  The Quakers reunited under one roof when Ice Line was built in 1993.

The Quakers grew over the years and by 2015, the organization consisted of 32 teams (8 girls teams and 24 boys team). We successfully helped develop the skills and knowledge of both our boys and girls teams.   Over the years, our teams have successfully qualified for Delaware Valley Hockey League and Atlantic Amateur Hockey League District Playoffs/Championships.  In addition, we have had many teams achieve the ultimate goal of advancing to USA Hockey National Championships.

In 2017, beyond our control, the Quakers were forced to find a new place to play. Determined to save the Quakers and provide a new home for their players, members of the board moved forward in search of a new facility.  As fate would have it, the original home of the Quakers (Westtown Rink) was vacant and up for rent. With the support of several coaches, parents, and families, the Quakers board decided to take on the project with plans of opening a new rink in time for the 2018-19 season.

Much blood sweat and tears were shed, and we are ecstatic to say our dream has come true and we now call PNY Sports Arena our new home. We are grateful to all of those involved in making this a reality, and are ready to forge ahead stronger then ever, and rebuild our organization to the powerhouse it was once before.
#webelieve #quakerfamily #nevergiveup

We are excited to have returned home!